Today is time for another Bollywood evening with Tarja, so I thought I better empty some of my back-log in this respect also. Last time we watched ummm… something? Obviously something that the total awesomeness of Amar Akbar Anthony has totally wiped from my memory. Maybe Tarja remembers.

But Amar Akbar Anthony, maybe the best movie evah! See, the poor chauffeur of a rich slime ball takes a blame for a traffic accident when he is promised that the slime ball will look after his family when he is in gaol. After release, he finds his wife ill with tuberculosis and his three small sons starving. Full of rage he goes after the slime ball tries to shoot him (unfortunately, like all smart rich people, the slime ball is wearing chain mail under his shirt.) The father takes his children along in the getaway car, but they all become separated in the hassle.

At the same time his tuberculous wife does not want to be a burden and wanders of to kill herself, is hit over the head with a tree branch in a thunderstorm, becomes blind, and takes the accident and a timely arrival of saviour as a sign against suicide. With great tragic Irony, that saviour is a Muslim tailor with a tiny crying tyke on tow: one of her now missing sons and she does not realize it. The tailor adopts the boy, raises him as Muslim and calls him Akbar. The oldest, Amar, is found by a Hindu policeman who adopts him, and the Middle son was left at the gardens of Catholic Church, so the priests there raises him up as a Christian: Anthony. All others think that our poor chauffeurs progeny perished when his getaway car went off a cliff. In reality, the chauffeur survives the crash with a box full of gold, and when he is unable to find his kids, he retires to plan a revenge.

Amar follows his stepfathers footsteps in the police, Akbar becomes a popular qawwali singer and Anthony ends up as bit of a crook, making deals not that legit. But he does it with twinkle in his eye and a song in his heart, so he is not bad, really more like mischievous. They all meet accidentally at a hospital and end up giving blood to a blind woman who has been in accident. And then the movies starts. All this was in the teaser before opening titles!

Amar Akbar Anthony has everything: twists and turns, missing persons and mistaken identities, chases, fights, romance x 3, miracles, revenge, tragedy, friendship, humour, prevention of a marriage at the nick of time, great music, and an absolutely surreal easter celebration with Anthony bursting out of a giant easter egg and singing something about “hemoglobin in the atmosphere”. I think that this and Main Hoon Na are now my favourite gateway drugs to Bollywood

We had visitors last Saturday. A whole bunch of them: big folk and even bigger ones. And some that were big, but in a small way. Curious creatures, screamed a lot (or that it seemed like, my hearing isn't what it used to be...) and run around quite a lot, too.

I guess they were celebrating my birthday. I turned 15 a week ago. I'm told that's a LOT. Doesn't really feel like that, methinks. I chased a squirrel the other day.... Where was I? Oh yes, a party. I mingled with the people and Girl and Boy seemed to be enjoying the occasion as well. People brought food (and gave stuff for me, much appreciated) and drinks. I got some vegan doggie goodies. Taste fine. Not so certain about the hemp chocolate I tasted as well. Lots of fibre, I reckon.

Tiresome, this partying is. I managed to stay up thru the whole shebang, but after I took Boy out with the last visitors, coming home was pretty tough. I blacked out like a light-thing on the ceiling when Girl or Boy touch the little knob on the wall. Wow. Woke up rather late.

I think it was a good party. At least Boy and Girl seem to think so. And Ninni, who is really spiffy with them art-things.

Yawn, better get some sleep now. I'm going to the stables tomorrow. Need to chase Whiskas, the Cat. 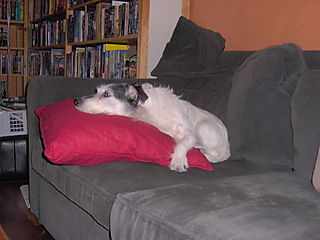 Sometimes, she is awake

Clearing some of the backlog

The backlog of read but unreviewed books just keeps growing and gives me angst, so here are few to make me feel marginally better:

You may remember I was hankering after this earlier, after reading Brody’s bio. And good thing I did; this is the way cultural history should be written. A Highly Civilized Man is an excellent biography of Burton, or rather an examination of the Victorian world view and it’s relationship with “the other” using Burton as a focal point. Kennedy examines Burton’s life chronologically through the roles he assumed and iterests he held through his life from “the gypsy” to “the explorer” and from “the racist” to “the sexologist”.

As is said earlier, Burton’s life-long efforts to reinvent himself, to shock the establishment and at the same time want its acceptance, marks him not only as a man at odds with values of the time, but also as a man who also reflects and brings those values in focus. Kennedy, I think, manages very well to situate Burton’s ravenous hunger for places and people and his mischievous desire to shock the society in its historical context and illuminates both the ways in which Burton negotiates and renegotiates his relationship with the Empire and Britain but also how his contemporaries on larger scale were trying to contain and comprehed this vast empire of “other” they ruled.

Castle Waiting was a comic published independently by the author, Linda Medley. After a long hiatus she is now continuing the story with Fantagraphics as publisher. They have collected all previous Castle Waiting stories into a book-size volume. Medley’s style of drawing is such that the smaller size does not diminish the effect, and the book as a physical thing is a nice object. As far as contents go, Castle Waiting pretty much lives up to its name. The Castle of the Sleeping Beauty has become a refuge for all sorts of people from antropomorphic animals to bearded nuns. They pass time in every day chores of the Castle and telling each other stories of their lives. It is a quiet, funny and engaging comic about small things that turn out to be pretty big.

Little Brother is a didactic novel, an angry impressive and tech-savvy diatrabe against the way "the war on terror" has narrowed the privacy and freedom of citizens without being the least bit effective. It is a story of a terrorist attack on San Francisco and how a bunch of teenagers playing an ARG near abouts are picked up by Homeland Security. Scared shitless but also angry, one of the kids, Marcus starts an underground movement against the government.

Little Brother is a page turner, it is scary and even though you want to think it is absurdly impossible, you read things like this and  this  and think again.  I do, however think that the didactic nature of the novel does  it disservice at times - the technoexposition and the civic lessons can get a bit tedious. Even so, defenitely worth the Hype. Go read an excellent review by Finncon guest of honor Farah Mendlesohn here.

Via Making Light I also learn that Little Brother has made it to the NY Times Bestseller list, not too shabby for a book you can legally download for free...

Apparently, after a polar phase, I am now into exploration of the sources of the Nile. First Burton, now Stanley. Of all the great imperialistic explorers in 19th –century Africa, Stanley has by far the worst reputation. Not only are his actions on both his great trans-African journey and his Emin Pasha relief expedition harshly criticized, he is also seen as the principal partner of King Leopold and thus responsible for the atrocities and the immense tragedy of Belgian Congo at the turn of the century.

Tim Jael, who has also written the definitive biography of Livingstone, has had access to a number of documents unavailable to earlier biographers, including Stanley's original diaries and his private correspondence, and bases his revisionistic work on these new sources. Jael’s Stanley is deeply insecure man with a shady youth, but he argues convincingly against the Kurtz-like dark and destructive force that has been the standard interpretation. Stanley that emerges here is a thoroughly human character, a man whose life was shaped by his childhood and the lies he told of his origin, and who ironically destroyed his own reputation by creating the myth of the saintly Livingstone, a myth agains which his own actions were always mirrored.

Wanna come and see if there really is a Big Red Cat on our wall, a book shelf in the loo and orange walls in the livingroom? Here is your chance. We are throwing a housewarming party on Saturday 24. May from 5 p.m. onwards. We need no gifts, but if you can see your way to bringing something to eat that would be great. And BYOB/OPM :-)

So I think we are all again in agreement: Åcon was great fun, again. It is just about perfect combination of things sciencefictional, hanging out with friends and holidaying. I think we hit the jackpot second time with Ian McDonald who was fun, engaging and sociable guest of honor. As all the copies of Brasyl and River of Gods the committee had brought to the con were sold out, I don’t think I was alone thinking so.

Jukka was again doing programming left and right, and maybe because I see him plenty in other contexts and am very difficult to please, I could have been more wowed. Though contrary my habits, I did watch and enjoy Nevermind the Buzzaldrins and enjoyed a lot, special thanks to Herman and panelists for helping to make it work.

Other highlights of connish nature were Tanya’s presence - her perspective in discussions was really interesting – and the last program item of the con, a sort of round table discussion on the high-lights of the year. I liked the ex-tempore format and really think that in such a small con this kind of general discussion with everybody pitching in could work in some cases better than a panel.

Hanging-out part was great fun too, there is a sort of bonding experience in a con such as this which leads to getting to know better people you know just a little, which I thoroughly approve. I also love the silliness, stuff like Pink Ilja, Vesa’s  doctor What cartoons, the con members buying the local toy store out of Hello-Kitty lollipop-fans and Frogs Ernst and Robert heckling the program items.

Icing on the cake was the turisty part of the trip. Linnea had arranged a trip to the spa where we had a jacuzzi to ourselves and plenty of room in the pool. There was also a pool from which you could just swim outside enjoy a great view. I even went swimming in the sea. Lovely. Others cycled to see Kastelholma or motored to the highest point on Åland. As last year, I went yarn shopping and came away with woollen sockyarn on discount and kid mohair. Ylva found some gorgeous pure silk yarns. Also I got a wonderful and totally unexpected  birthday present, THANK YOU!!!!

There actually are six (six!) deluded persons who promised to arrange Åcon next year. Well, I am all for it, this is FUN! Also, internet.