I rather think I am now on top of my reading-list. This should be it. How weird. I have also read Temeraire, but if you want to know what I thought about that, go and get yourself the next Tähtivaeltaja. I feel like a bad fan because it is the only genre novel I have read for awhile, if you don't count maybe marginally fantastic Russell and Mitchell.

Mary Doria Russell’s first novel, The Sparrow was one of the better books I have read, and it’s beauty and horror lingered on in my mind, so much so that I have never read the sequel because it would either be as harrowing as the original or it would not be as harrowing and would tarnish the excperience of reading the Sparrow.

Dreamers of the Day, which I bought because it is an Arabian Lawrence novel and written by Russell is a very different animal. It is a story of Agnes Shanklin, an  accidental heiress (influenza has killed all her relatives) who takes a Cooks tour trip to Cairo in 1921. There she and her dachshund Rose bump into the bigwigs of the Europe who are splitting up near-east in the aftermath of the First World War. As Agnes’s late sister knew Lawrence, she gains access to their circle, and is able to observe the process from the outside.

Dreamers of the Day is surprisingly quiet and reflective novel and even though Russell stated that her inspiration was to open up the history of the crises in the modern Middle East, the story in the end is less about Lawrence, Churchill and Gertrude Bell, and more about Agnes and her growth. Which is fine by me, because I absolutely loved her, she must rank as one of my favourite protagonists ever.  Beautiful novel, whimsical ending, great protagonist and an interesting glimpse to the conference which shaped the modern Middle East. There is no bad here.

Mitchell’s Black Swan Green is very different from his earlier output, it is pretty much no-frills bildungsroman, a month of the life of a young boy growing up in a small town, Black Swan Green of the title during the Falklands war. Jason is thirteen, stammers and writes poetry under a pseudonym so that his mates won’t find out.

I am not sure why I liked this very realistic growing-up story so much better than the more imaginative and symbolic Kafka on the Shore, but I did. Perhaps it is because Black Swan Green communicates so well the feel of the 1980s, and I was about Jason’s age in 1982. I also liked how aware Jason is of the complex and fragile hierarchies at school and at playground, there was something terribly honest and lifelike in his calculating efforts to stay in middle of the pack. Finally, as with all Mitchell’s books I have so far read, as a novel it is impeccable. The structure is carefully thought out, the register never falters, and the language sings. I did not expect to like this book, but darn, I did. And for those who like their prose in Finnish, Sammakko is publishing Black Swan Green in Finnish in October.

Hollinghursts Booker-winning Line of Beauty is instantly recognisable vision of 1980s thatcherite Britain and managed quite brilliantly juxtapose the new Tory elite and pre-AIDS gay scene with each other. Swimming-pool library juxtaposes two different gay experiences with each other as it alternates between the modern(ish) day exploits of Will Beckwith and the diaries of elderly Lord Nantwich whose biography Will is engaged to write. It is an intelligent, well structured book wich carefully teases out the the contrasts and comparaisons between periods, between gay as other and other as oriental, but somehow I found it much colder than Line of Beauty, perhaps because Will is not particulary sympathetic protagonist.

There is a genre of historical novels, where the author follows the lives of a family or a place (or both) through centuries. Edward Rutherfurd has made a career out of them. Saylor, known best from his Roma Sub Rosa –series of mysteries set in the ancient Rome, takes a crack at the genre with his tale of roman republic from the foundations of the city to Caesar and Augustus. It is necessarily episodic tale following the members of the same family through the seven odd hundred years. Though Saylor’s knowledge and scope are commendable, I found the whole less than satisfying. I tend to dislike novels where point of view characters change, and thus every time got into the rhythm of the narrative, the story changed. This of course, is not so much a problem with the book but with the reader.

Painted Lady is a part of a series, and avery run of the mill detective story set in regency London, where architect Christopher Redmayne and a puritan constable Jonathan Bale investigate the murder of a lord whose beautiful wife was the object unwanted affections of a party of unsavoury men about town. It is difficult to put a finger to why I was less than enthused about the book, maybe it is that even if the scenes between Araminta and her maid might pass the Bechdel test, the female characters are still so noticeably thinner than male characters that it lessens my enjoyment of otherwise passable historical mystery.

As we seem to be in the middle of a new scramble for Africa, it was very educational to read about the first one. Pakenham’s Scramble for Africa is a basic primer to how the European states took over Africa in a pretty much unplanned scramble, extended their european rivalries to that continent and created the divisions which plague Africa even today. The book jumps all over the continent, trying to tell the story in a roughly chronological order, but manages even so to create fairly lucid narrative, and the story itself is nothing less than fascinating. This is an old-fashioned narrative history about the imperial powers and their actions, and thus Africans themselves are pretty much reduced to objects of conquest without any voice of their own. Considering the scope of the book, this is defendable approach, but if one wants to have an even half-way accurate picture of the history of the period in Africa, other books written with other viewpoints and with a more theoretical approach are a must.

As I now own all but one of Stout’s Wolfe books, I was struck by a desire to re-read them in order. After Sayers Stout is my favourite mystery writer because of his characters and his language. The great big polysyllabics rolling from Wolfe’s tongue just get me every time…  First on the list was Fer-de-Lance, the book that introduced Archie and Wolfe to the world in 1634. Here Fred Durkin brings Wolfe a case of a missing  Though Archie is remarkably like himself, and most of Wolfe’s eccentricities are present, the series is this inaugral adventure still finding its feet, and I would not recommend it as a starting point for a novice. The murder is rather over-the-top (a poisoned dart in a golf-club), and I found the resolution less satisfactory than many other Wolfe novels. Average but still enjoyable.

Via Cheryl I learn that US government is now sponsoring Manchester United, and via TOR that Scientific American has republished Benoit Mandelbrot's article on how fractals can explain stock markets. If you add silly people going on about the end of the world and the LHC, there really is a sort of England in early 1650's vibe going on...

Today begins my open university Cultural history 101 course on the net, so I have a perfect excuse to hang in teh internets all day :-) And welcome if you googled yourself here. In keeping with that theme I want to reflect on change. I was trying to find the right translation for "verkkokurssi" from my dictionary, but the poor thing did not recognize the word. So I went to MOT via Nelli (don't you just love all the contrived acronyms) - which was much more bothersome than grabbing the dictionary next to me - only to be told that the state of the art university strength digital dictionary did not know the word either. Pshah, I say unto you, what is the use of digital dictionary if it is not updated often enough. And don't tell me "verkkokurssi" is not an established concept. Okay. That was not so much a reflection as a rant, but whatever. 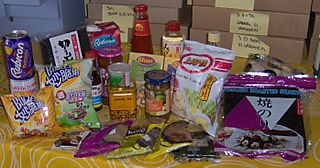 The shopping spree of the title is one of those good changes we have seen in Helsinki over last 15 or so years. And that is the variety of ethnic shops where you can get many wonderful things to spice up your life. We noticed that the spice rack was looking a bit depleted and went to Hakaniemi. Jukka determinedly kept me a way from all the shops that sell and rent Bollywood movies, but even so we managed to aquire a nice collection of all sorts of strange drinks (Jukka's speciality) and other stuff. You can't believe how much cheaper nori is at Oriental Supermarket than at the corner shop... I already dug out the indian cookbook and we had some potatoes in yogurt and curried green beans yesterday. Yum.

This weekend we had a slight hobby clash as Jukka is at Comics festival and I went to Porvoo to a dog show with Martti, who was expertly shown by Eeva and walked away with his second certificate and the best of breed trophy, proudly pictured on the left.  My previous dogs have been mixed breed so this was a first time at a proper big dog show with hundreds and hundreds of participants. It was fun and Martti behaved like a perfect gentleman all the time. Tomorrow we go to meet other Kennel Marmalade heelers, should be fun :-)  Jukka - I understand - will surprisingly be going to the comics festival. That would have been fun too, but at the moment I am pretty much all about the awesomeness of Martti the wonder dog (not forgetting the zen-like cuteness of Myy), so no contest, really.

For Tarja (and other Fables fans too)

As I was futilely trying to decide which Stephen Sondheim musical I like best I recalled this, and thought Tarja might appreciate this version of princes Charming. It is from Sondheim's Into the Woods, in the first duet the princes rhapsodise over Cindarella and Rapunzel, in the second act they find that marriage is not what they hoped and there seems to be more princesses to be saved...