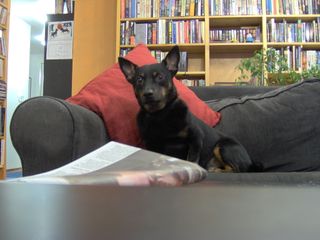 Martti has had some very interesting times lately. First great upheaval was the Bone. We bought him a nice reindeer bone from the pet store as a treat. Martti was very suspicious of it and it took him three days to actually go near enough to touch it tentatively, and one more to actually grab it and start eating. Go figure. We have also started training some basic obedience stuff, though Martti seems to think that if I give him goodies inside, it means I am going to trim his nails. Which has meant giving him random treats with clicker just to remind him what it is all about.

We also met another Lancashire Heeler on one of our walks, first time this has happened. Another first was a nice lady with Västgötaspets who was the first ever person to be more taken with Martti than Viivi. A woman of discerning taste, obviously. As you see, camera is still something a bit suspect, but he does stay put and does not get too stressed about being photographed :-)

Posted at 23:48 in Dogbloging | Permalink