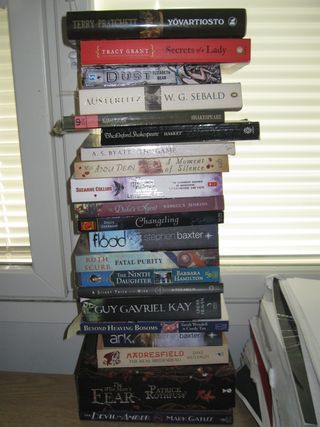 It's been a while. How's life? Same here.

As it is July and my vacation time, I thought that secluding from the world in general was not a bad idea. And since Missus agreed, we decided that a little cottage time was in order.

I took twelve books with me and returned with 24. Of the 12 I read nine, while the other dozen were bought from the Mäntyharju thrift store, for reasons ranging from "Look at the price of this first edition of Borges!" to "Ah, material for my next reference book".

I brought mostly entertainment with me, which turned out just fine, since I did manage to read nine books in a week. Here is a rough coverage of the said books:

John Maddox Roberts: Saturnalia - Fifth book of the SPQR-series of historical whodunnit's in the republican Rome of playboy/detective Decius Caecilius Metelleus Younger. Very enjoyable romps: good humour, decent plotting, fun characters. This one sees our protagonist suddenly back in Rome, where his one of uncles has been murdered. The Elder Metellus wants Decius to ind the grieving widow guilty, while her brother, the veritable Nemesis of our hero, really wants her to be innocent. SPQR-series is well worth one's time and money.

John Maddox Roberts: Nobody Loves a Centurion - Sixth SPQR-book and Decius id dispatched to Gallia, where Caesar is running his masterplan for eventual leadership of Rome. A strange case of dead primus pilum gets Decius in trouble, since the probable murderer is one of his own patronage, or could it be one of the Gauls? Or possibly a blood-thirsty German, one of the many that are crossing over the Rhine? Hilarity ensues.

J. Pekka Mäkelä: Karsta - Fourth novel by the (almost) lone champion of current Finnish SF. Another quiet masterpiece of bystander-sf. Humanity has lost the interstellar war and aftermath means cleaning up the places. Mäkelä solidifies his place as an important sociopolitical-sf writer.

Juha-Pekka Koskinen: Eilispäivän sankarit - Fun pulp fiction where the main character is woken from 30-odd year coma, after a bothched-up robbery attempt. Surprisingly, he seems to have been found guilty of more crimes than he remembers, and now someone is telling him to stop digging up the old stuff. Good, solid Finnish-pulp from craftsman of many different genres. A whiff of spec-fic here, but only a dash of the stuff.

Scott Oden: The Lion of Cairo - Very good historical fantasy, that did manage to feel both fresh and original, while nodding lovingly at Howard and Lamb. 12th century arab world, with muslim protagonists and very little Franks to mess it all up. Delightfully gritty, surprising and swashbuckling adventure. Didn't expect the fantasy aspect. Loved to read more and if I'm not mistaken, a sequel is a-coming. Very much recommended.

Tansy Rayner Roberts: Love and Romanpunk - Four stories of Romanpunk, from age of Julian emperors to near-future. Very nice take on various myths. Loved the Victorian-piece, while I wouldn't have minded seeing the Patrician-story a bit longer. There is some strong SF/F in Australia.

Ari Marmell: A Conqueror's Shadow - Another dissappointment, which managed to make a small comeback in the later stages. Very average bulk fantasy with some seriously silly characters, plot points and ideas. There is a definite improvement in the last third pf the novel, but while the characters seem more defined and their actions even somewhat understandtable, there is a weird juxtaposition between the way the author handles his characters and the blase rpg-plot and the adult/PG-feeling of the novel. At times the main characters are doing unspeakable deeds, whilst the writer tries to keep the feel of the book at almost kindergarten-level. Horrible violence next to decent humour, next to childish warfare tactics, next to brainless criminal mastermind, next to enchanting tale of fantasyland history, etc.

For posterity's sake, here are the three books I didn't read: Karen Lord's Redemptio in Indigo, Iain Gale's Man of Honour and Jo Walton's Among Others (Sari read this one).