This year, the Advent Calendar is about Bollywood: 24 short reviews of Bollywood  (or rather Indian) films I have lately watched and which have been made during the last about ten years.  Also classically, a tea/infusion calendar. I have Clipper's Advent Calendar of organic Tea which seems to have 12 flavours, and I try to find another one so I don't have to do same flavours twice. So, Let's go: 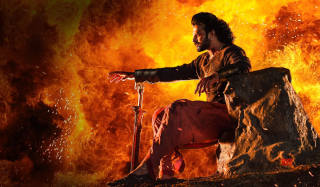 Baahubali is pretty much like Avengers Infinity War and Endgame: really one movie divided into two. It is a sweeping epic set in semi-mythical kingdom of Mahishmati. It is full of family drama, superhero-like heroes, epic battles and CGI elephants. It begins with Baby Baahubali being spirited away from his palace after a coup and brought up by villagers. When he grows up, he climbs a huge-ass waterfall, finds a cool warrior-girl who is fighting a guerrilla war against the Mahishmati tyrant. Then he meets the faithful old retainer who recognises him as the son of the lawful heir and tells the story how Baahubali senior met a sorry fate. It is all about sibling rivalry, palace intrigue, honour and jealousy. This story takes at least two thirds of the movies. When the old retainer has finished his story, Baahubali junior wants revenge and they go and attack the castle. With a stratagem which took twitter in a storm.

Baahubali-movies were the most expensive movies made in India at the time, and Baahubali 2 is the most popular Indian movie of all time. They are also interesting in that they were shot in tamili and telugu and dubbed to other Indian languages. Latest film from the same distributor was shot in tamili, telugu and hindi. Instead of local cinema remade in hindi as has been the habit for years, it seems there is capital enough for big films in other language areas, and just dubbing or shooting them in multiple languages gives them exposure in all Indian markets.

Baahubali films are somewhat different from modern hindi cinema even historical dramas of, for example, Sanjay Leela Bhansali. They are even more melodramatic, gaudy, long and full of slow motion and bullet time stunts. Three years and probably a bigger budget have made difference in the quality of the movies, the later one is sharper and has better CGI. I also liked that all three women: Baahubali’s mother, his fiancé and his father’s aunt-mother were all pretty kick-ass characters. But as a whole it was just too long and just so grand with its emotions and plot that it went just too big for me to really work.

Clipper Happy Mondays. This is a ginger and lemon infusion which has also black pepper and lemon grass. It is a bit bland but that might be because I don't have the patience to let tea bags infuse the 3-5 minutes instructions dictate. It does have an interesting peppery after taste, though. I am still making my mind up if I like it or not.

Posted at 19:17 in Bollywood, Food and Drink | Permalink