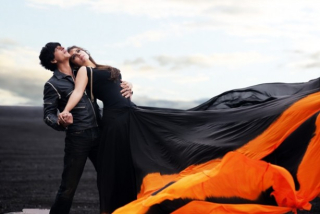 Dilwale - also from year 2015 - marked the return of the most famous jodi of them all: Shah Rukh and Kajol. It is a Romeo and Juliet story - twice over. in the past Raj (Shah Rukh) and Meera (Kajol) fall in love but their parents are form rival crime families, and both of them are involved in family business. There are misunderstandings and death and they break tragically up. In present day Raj's younger brother Veer (Varun Dhawan) falls in love with Ishu (Kriti Sanon), who  turns out to be Meera's sister. The romance of the younger siblings is the comedy part of the film, helped by Veer's best buddy Sidhu and Raj and Veer's neighbour Meni (Johnny Lever). Raj and Meera are the drama part with meaningful glances, wind machines and rain.

It is all very primary coloured, and the hit song Gerua has lots of Suraj Hua Maddham vibes with flowing saris and exotic locations. Film's Goa looks like a cartoon, and Bulgaria like a travel brochure. The plot is repetitive and the funny bits are not that funny. The modern day romance is a bit annoying, mainly because Veer is spoiled brat. But I am and always will be a sucker for Shah Rukh's charisma and so as a good bhai to Veer, an avenging vigilante fighting against drug lords or a sad man who has lost his love, he makes it all good. And Kajol and Shah Rukh always work together. So I am good, even if the film could have been better.

Posted at 20:27 in Bollywood, Food and Drink | Permalink