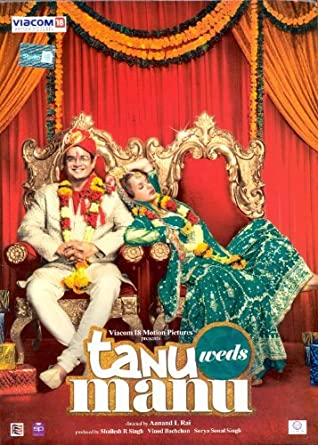 Manu, an NRI doctor from London comes back to India to meet girls his family have selected as potential mates. He falls for the first girl, Tanu, but the college-educated girl tells Manu he already has a boyfriend and does not want to get married. Manu bows out from the arrangement without blowing Tanu’s secret affair but meets her later in a wedding in Punjab and things get complicated.

From at least Hum Aapke Hain Kaun (1994) onwards romantic comedy and drama were the blockbuster genres of hindi cinema. Nowdays top of the charts have much more varied movies, and even the romantic comedies have more range than before. Tanu Weds Manu does not have much of a plot, and it has familiar tropes from Punjabi wedding to a race to a train station a la Dilwale Dulhania. But Tanu Weds Manu feels less candyflossy than older romcoms. Manu is more sensitive modern protagonist than many, Tanu’s rebellion against tradition and her parents’ wishes seems very understandable, and the young people have their own contemporary lives apart from the glittery traditions.  Even the obligatory wedding feast song looks more like ordinary people having fun than hihgly coreographed affair. The ending gets rather melodramatic – but it would not be Bollywood if it didn’t. I do have to say that it was a bit annoying that after Tanu had created all the problems surrounding her marriage, it was her parents, Manu, and his parents that had to try to straighten everything up, she could just hide in her room. Because arranged marriages.

Clipper Wild Berry. Again, a berry infusion, not a tea. And surprisingly tart. It reminds me of Karkade which is not surprising because one of the ingredients is hibiscus. There are hints of liquorice and maybe rose hip, but I really can't taste pineapple, nettles, or billberry. Also a bit misleading name as so many ingredients are not berries.

Posted at 19:39 in Bollywood, Food and Drink | Permalink