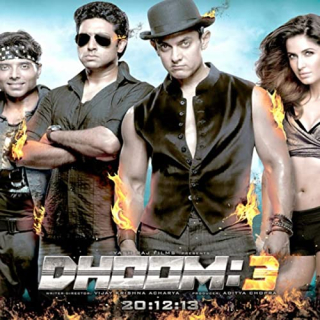 Dhoom is the second largest franchise in Indian cinema. All films feature Abhishek Bachchan and Uday Chopra as cops investigating complicated thefts, and all of them feature big name antagonists (John Abraham, Hritrik Roshan, Aishwariya Rai Bachchan, Aamir Khan). In this third instalment Aamir Khan has suffered a trauma as a kid - his father committed suicide when a bank foreclosed on his Indian circus in Chicago. As an adult he restarts his father’s circus and takes revenge on the bank by robbing its branches. Abhishek and Uday are called in to investigate.

There is, of course, a twist, but it is predictable as this movie has clearly taken elements from Prestige. Even so, it is an entertaining thriller with lush musical numbers and typically Bollywood unreal slow motion stunts.  The female lead, Katrina Kaif does sexy athleticism well but does not have that much to do, as this is really a cat and mouse game between Abhishek and Aamir.

Dhoom franchise’s most recognisable element is the song Dhoom Machale which in this instalment is a tap-dance, which is performed nicely against the genre as something rather heavy and jarring. It is difficult to believe Aamir is pushing fifty in this one, he can’t beat Hritrik’s dancing in the second instalment, but his intensity works well both in the song and in the whole film.

Clipper Rise & Shine infusion has Yerba Mate, Lemongrass, Lemon Verbena in it, so caffeine and citrus makes it a morning “tea”, not really evening. The citrus elements come through nicely, but not my cup of tea, so to speak.

Posted at 18:12 in Bollywood, Food and Drink | Permalink