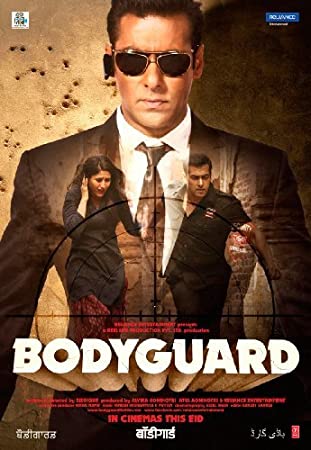 This was the highest grossing Indian film of 2011, and is a remake of director Siddique’s  Malayalam film. Salman Khan plays a superhero-like bodyguard named Lovely Singh, who is hired to protect his benefactor's daughter, Divya (Kareena Kapoor).  Kareena tries to distract officious Salman by phoning him and pretending to be a girl in love with him. Salman does not find out who is calling him, not even when Kareena finds herself really falling in love with Salman. In the seminal scene Salman meets Kareena's best friend on the train station and thinks she is the girl who is in love him. In the last third of the film Salman and Kareena reconnect after years, when the best friend has died of cancer and left Salman a widow.

This seems like a throwback to 90s or early noughts. There is a love triangle and two distinct halves of the story. The humour is so, so broad – the Johnny Lever role played by Rajat Rawail – and the violence is both cartooney and graphic.  Also, Salman Khan dances with his biceps. I am not kidding. The best joke is a T-shirt Rawail is waring which says: “I am in shape. Round is a shape.” This was not really my cup of tea, especially as I have never understood the popularity of Salman Khan, and this is really a vehicle for him. I also miss the pagal Kareeena, Divya is pretty one note. There are at least three of four remakes of the original for the different Indian markets. If this was any better, it would have been interesting to see the different versions.

English Teashop: Super Star Anise Tea. I got bored with Clipper's infusion. This at least has black tea in it, and English Teashop advent calendar  comes in pyramid bags. I quite liked this one, I can taste both black tea and anise, but the anise does not overpower.

Posted at 23:52 in Bollywood, Food and Drink | Permalink