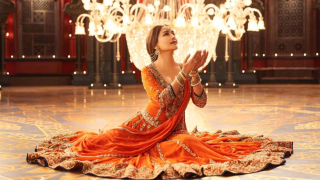 Abhishek Varman’s Kalank was conceived as luscious big-budget melodrama. Every shot is fantasy-gorgeous, all the costumes are color-coded, and the love stories are sad and big. The genre is historical – this is a partition drama. In 1945, in what is now Pakistan Satya (Sonakhsi Sinha) is dying of cancer. She goes to meet her friend Roop (Alia Bhatt) to persuade her to move in to “comfort” her husband. Roop agrees, if Satya’s husband Dev (Adtitya Roy Kapoor) will marry her. As Dev is in love with Satya this is a marriage in name only. Roop is sad and has nothing to do, so she begins take dancing lessons from Baahar Begum (Madhuri Dixit), and work in her husband’s newspaper. Then he meets his father-in-law’s illegitimate son Zafar (Varun Dhawan) who wants to seduce her to get revenge on his dad. And things do not go well, especially as Baahar Begum and Zafar are muslim, and Dev’s family hindu.

The story is muddled and though the roles would give possibilities to greater probing of the loyalties divided by partition, this has been written as a personal melodrama. Partition is just a backdrop which makes it seem like a lost opportunity. The best thing is to see Madhuri Dixit again, though her role and relationship with Bhatt is basically straight from Devdas. Dhawan spends most of the film without a shirt forging swords and battling CGI bulls, and Bhatt, the investigative reporter, walks around the red-light district without any problems. So it is also a fantasy movie. It could have been much better, but it is pretty enough you can sort of forget it makes very little sense.

The strangest thing was a beautiful shot of Zafar sitting on the banks of ariver (Ravi?) at the sunset, smoking. And a small text appearing at the right bottom corner saying “smoking kills”.

Posted at 21:09 in Bollywood, Food and Drink | Permalink