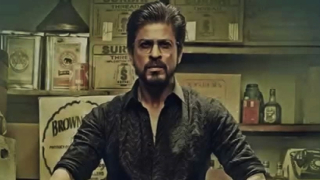 With age and success, SRK has considerably slowed down making films - it is not unusual for a popular hindi star to make half a dozen films a year. In 2017 Khan had a cameo in Slaman Khan’s Tubelight, made a romantic comedy Jab Harry Met Sejal and this crime drama, which was the years 6th most popular hindi film worldwide. Raees is the life story of the titular gujarati bootlegger and his rise to local criminal elite. He is hounded by the lonely honest cop (Nawasuddin Siddiqui) who is determined to shut down liquor trade in the dry state.

Raees is interesting - from my western point of view - in many ways. In a way, it is a return to the roots of SRK’s film career. He began by playing very convincing bad guys and psychopaths, and though he also played good guys, it was with Dilwale Dulhania Le Jayenge that he made his real breakthrough as a romantic lead. Raees is a violent man, and the violence is very front and centre of this movie from the gore-filled fist fight in a Mumbai meat market to a more stylised spree killing during an item number.

It is also interesting, because it is one of the handful of times Shah Rukh plays a muslim as a lead in a film. Despite his prolictivities, Raees is depicted as a practicing Shia muslim who is almost assassinated because he refuses to miss the mourning of Muharram ritual (the attempt – I must tell you - is followed by a Bourne-like chase scene with lots of parkour). At the same time, he dismisses the problems his religion has with his trade by quoting his mother’s adage about business being more important than religion – as long as nobody gets hurt.

But of course, lots of people get hurt and Raees does not really seem to care as long as people he considers his are ok. By the later part of the film he as became a proper crime lord, but with a heart of gold. He tries to help his community – both hindu and muslim - and is appalled when he has been used to smuggle in explosives used in an act of terror.  His nemesis, Majmudar has an opposite trajectory. He is introduced as straight laced cop who has a sense of humour and ends up getting so obsessed with Raees and so disillusioned by the corruption in the police and the political elite, that in the end he disregards the rule of law and just executes the man he has chased for years.

Clipper Calmer Chameleon: Camomille, Honeybush and Cinnamon. This is basically camomille tea with something tasting vaguely honey-like. If I had a sore throat this might be good.

Posted at 23:12 in Bollywood, Food and Drink | Permalink