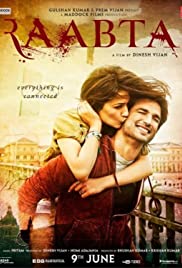 So, if we have partition drama here on this advent calendar, we must also have re-incarnation drama. Young, playboyish Shiv/Jilaan (Sushant Singh Rajput) gets a job in Budapest where he meets Saira/Saiba (Kriti Sanon) and feels an instant connection. Saira has strange dreams about drowning,  She also meets Zakar/Qaabir who ends up kidnapping her in a mansion filled with portraits of her. Turns out Shiv and Saira were warriors on the opposite sides of the war eigth hundred years a go ,and married to end the conflict falling in love at the same time. Zabir  killed him and Saira chose to drowned with her husband. Zabir slit his own throat

The modern bits of this romantic drama were actually quite okay, Sushant has buckets of charm, it is nice to see Budapest as Budapest instead of pretending to be Rome, and the romance is sweet but more modern than many. The past part does not work quite as well. It has Ashoka vibes - everybody wears lots of kohl, furs and tattoos - but instead of being strange and foreign, it is a bit silly, especially Sushant's wild man prince just does not quite work. Neither does music which is really forgettable even with Deepika Padukone as an item girl.

English Teashop Chai Charge: Rooibos with christmas spices and garlic. I was really skeptical but this is actually nice.

Posted at 19:02 in Bollywood | Permalink