Jukka will read (in near future)

I forgot yesterday! So here are two movies 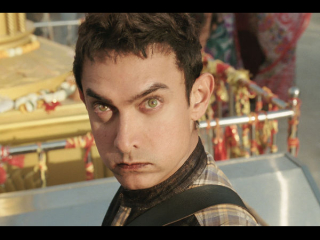 PK was at the time the highest grossing Indian movie. Somewhat unusually for Bollywood, it is science fiction, comedy, and a quite sharp critique of organised religion. Aamir Khan plays an alien sent to earth to research humans. He lands in Rajasthan and a local man robs him of his remote control which summons his spaceship. Stuck on earth, he tries to learn human ways, and ends up asking help from gods. They, naturally, will not answer. With a help of journalist Anushka Sharma he starts a movement against organised religions, and the way they prey on people’s fears and rob them of their money.
PK was surprising. I was ready to cringe as Indian comedy is really not my cup of tea, but the jokes were sort of actually funny, and Aamir’s physical comedy worked, as did his Buster Keaton influenced performance in general. There are a lot of close ups of his big eyes and jug ears, and some of the mannerisms are familiar from his other movies, but Aamir has enough of charisma (and pectoral muscles) to pull it all off. Anushka Sharma and Sunjay Dutt are also great in their roles. Songs were not especially memorable but worked well in the context. The way the movie handles religion is quite sharp, and the fact that it got some flak from extremists when it came out is not surprising. I am also sap enough to enjoy the great melodramatic denouement at the end. 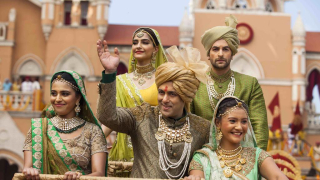 This 2015 Diwali release is a romantic drama and was second highest grossing Indian movie of its year. Prem (Salman Khan), carefree actor/guru  meets princess Maithili at a refugee camp where she is doing charity work and falls in love. The princess is engaged to crown prince Yuvraj (also Salman Khan) who faces problems with both his fiancé and his half-siblings. His brother tries to assassinate him for the crown, and he is injured badly. In a chance meeting, his majordomo sees Prem and hires him to play Yuvraj while the real Yuvraj recuperates. Misunderstandings, plots, kidnappings, swordfights ensue.
So I was Monty's Double. Or, nearer to home, Don (both original and remake). But instead of a war or gangster movie, this is a romantic comedy with some action elements. Kings and princes have only money and influence in modern India, not power, but showcasing the aristocracy filmmakers can produce even more extravagant visuals than usually. Also, the ultra conservative prince Yuvraj is shown taking a horse carriage to meet his sisters - though they are supposed to live next to his palace - and listens to music with ear buds on his phone on the way;  a nice contrast. Salman Khan wasn't bad in this, and thought the "family is everything" theme was hammered pretty hard, it was enjoyable fluff.

Posted at 19:02 in Bollywood, Food and Drink | Permalink