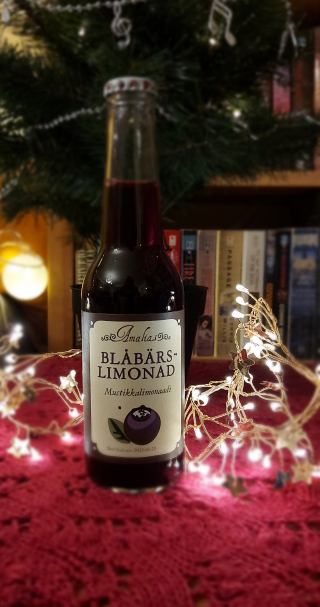 Drink of the day is Amalias Blåbärslimonad. Like other berry sodas in the line, this is pretty much carbonated bilberry juice. But it is excellent. Not too tart, not too sweet. Bilberry really comes through. Jukka says it is like one would hope the bilberry flavored mineral waters would taste but don’t. So success all around.

On 26th November we lost a giant of musical theatre when Stephen Sondheim died at the age of 91. And because I can't write as well as he could, this is basically a link collection.

Everybody wants to be Sondheim sings Alan Chapman. And there is a truth in his parody. Liking Sondheim is sort of shorthand for a bit snotty Broadway connoisseur who would not be caught dead being a fan of Phantom of the Opera. But Sondheim just is so good. His lyrics are poignant and witty and all around incredible. Just listen his first work as a lyricist, West Side Story: “I Feel Pretty” or “America” or any song really (There is even a new film out by Spielberg).

And yes, his music is very recognisable and incredibly complex and there are less tunes you can hum than average, as he himself parodies his reputation in Merrily We Roll Along. But it is never cold. Even a really high concept musical about art and artists – Sunday in the Park with George – is just beautiful. Here is Jake Gyllenhaal as pointillist painter Georges Seurat talking about art and relationships.

And his stuff is funny. Princes singing about princesses in Into the Woods, Mrs Lovett and Sweeney Todd visioning pies filled with people, Amy not wanting to get married in Company. Sondheim had an in credible talent for balancing drama and comedy. It is good to know I there still are Sondheim works I have not seen, like Pacific Overtures and Assassins. Something to look forward to.

Here is Broadway’s farewell To Sondheim.