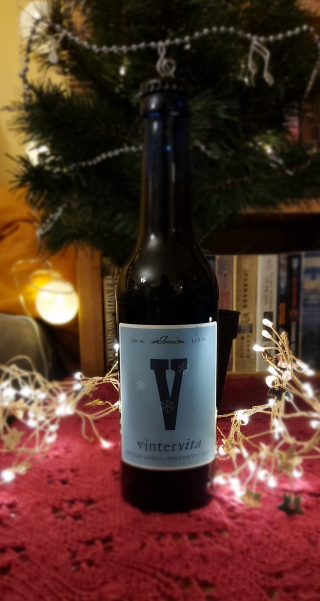 Because it is the night before the night before Christmas, when traditionally Finns stay up late to wrap presents and bake the ham, our drink is Antons Vintervita, which is glögg. Not exactly mulled wine because it is made of cold pressed billberries and lingonberries, spirits and spices, but the idea is same. A warm spicy drink for cold evening. And this is pretty traditional but really good. The wild berries taste great, and vanilla added to the traditional christmas spices sweetens the tart berries just enough. A winner. Jukka, a notoriously bad warm drink drinker, agrees.

And so it begins. Peter Jackson’s Tolkien movies are important to me. I am an incurable Tolkien fan, it is not an exaggeration to say that Lord of the Rings  has been instrumental in the way my life turned out. I would not have met Jukka without the novel, for one thing.

We saw the first film in Princeton where I was doing some post-grad stuff for a year, bought our first DVD player next Christmas just so we could see the extended version of the first film. After that, every Christmas we have either been to movies to see a new film (guest screening, so no queuing), bought the new DVD/Blu-ray of the next movie, or just watched a selection of the movies and most of the extras at home.

The films are flawed – especially the Hobbit ones – but even with all the cringe-worthy things (Faramir, my poor Faramir) they still are incredible. When i pretended to have stomach flue and stayed home to read the trilogy right through in the 80s I never thought that I would see to live the day that live-action movie could capture Middle Earth and its creatures. I’ll take ectoplasmic army from the paths of the dead and sandworms who can't burrow to Lonely Mountain though all other rock is fine for the utter perfection of Moria (up to the point Boromir says “They’ve got a cave troll”).

When you are beginning to be able to recite the dialogue in sync with the film, the extras are actually much more interesting. They were the first films which really made full use of the DVD extras. Every movie has over five hours of documentaries about making of the films, script, sets, special effects, filming, editing, scoring. The whole project was wholly megalomaniac in scale and the attention and love to detail is just mind blowing. Here, have a 10 minute segment on how they made the Hobbit feet. 1800 foam latex hobbit feet for four main hobbits in the first movie alone. I find all of this just a fascinating look into film-making on grand scale.

So the ham is in the oven, potato and swede casseroles are waiting their turn. And I am watching how Sauron’s armour was made. It is beginning to feel a lot like Christmas.