I was supposed to be the odd one out, but here goes. 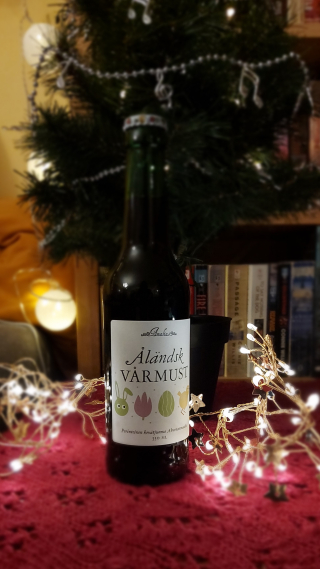 Today we check up on Åländsk VÅRMUST. Which is a "skummande och välsmakande vårmust från Amalias Limonadfabrik i Lemland!" Now, I've seen and tasted Påskmust as well as Julmust, and while I appreciate the effort, neither of these have made me long for another one. There might be the additional aspect of must not being that prevalent here in the mainland Finland, at least the Finnish speaking parts. I understand that in Motherland must is a bit of a... must in times of (apparently) religious festivities and that there are numerous companies offering their brand of the good stuff.

Unsurprisingly, Amalias being an Åland company, they should have a must of their own and you know what, this is the best must I've tried. I guess it might be a tad more sweeter than the other musts I've had beforem and as it goes, a bit of a bombshell when I think about Amalias sodas usual predilection toward less sugary taste.

Not that I am complaining. I get to drink this almost fully by myself, since Sari sipped it, turned her face to a somewhat disapproving grimace, and gave a succinct review: euugh!

"What the heck is must?"

Ah, I'm glad that you asked. Some say it's a bit like root-beer, but without the odious taste of sassafras. It's malt-suryp soda with some spices and caramel colouring. Superpopular is Sweden. Minor hit in Finland recently. Almost exclusively a Winter beverage, hence the name Julmust. Also, Easter, hence Påskmust. I don't know whether Amalias offers their Vårmust all year long, I bought this one in late August, so possibly?

The Worldcon 79 started yesterday and as one might guess, I'm not there. Neither are some 2000 Chinese, but they have already voted on Site Selection, and unless there's a minor major upset, the Worldcon 81 in 2023 will happen in Chengdu.

Is this a good thing? I'll leave that to other people to debate and ponder. Needless to say, the former Middle Kingdom has some serious problems with multitude of issues. We'll see how this goes.

Discon III has a pretty solid and large virtual presence for those willing to be online for their convention pleasure. After some problems on the first day, problems seems to be getting solved and there has been more positive commentary on the interwebs. I'm afraid this webcon-stuff is not for me. I tried couple ones on the early stages of the current pandemic, but soon realised that this is not really my cup of beverage. I'm certain a lot of the kinks of those early conventions have been sorted and everything is much more streamlined these days, but to me it is not a matter of technology, more of the isolation that just isn't worth the time and effort. Great if it works to other people. My loss.

That's why Fantastika couple weeks ago was so energising and entertaining. Being there with people, chatting and having a beverage. Cool. Mysig.

Wash your hands. Wear a mask when in close contact. Isolate if feeling at all ill.

This will pass. One day.

Let's have some nice news in the end: Konflikt, the 2023 Eurocon in Uppsala, Sweden has announced their first Guests.

Martha Wells as a Author GoH and DOSENTTI Merja Polvinen as the Academic GoH!!! w00T!