I have lots of books and films and whatnot to write about, but my brain has turned to mush, thanks to Åcon crud. Though in the interests of full disclosure I think patient zero in this case was either my mom or Jukka, so I most probably would have had this plague even without awesome Åcon. Also apologies for other suffering people for spreading the germ. 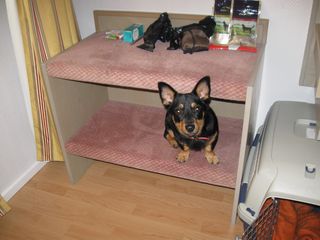 I have little - well, a lot - to add about this con to Jukka's report. I love the concept to bits, and have never had a bad or even mediocre Åcon. As noted in earlier reports Åland as a location rules, weather was was sunny if not warm, and the trip was pleasant and well organised (thank you again Hanna!). On the minus side hotel and bar were exceptionally sloppy with us this year. I kind of like the little dilapidated 1980s thing the place has going on, but room assigments were not done as per request which lead to all kinds of difficulties. I can also understand that the bar was overwhelmed with both ice hockey WC and us, but again, if you charge good price for the high end stuff then it would be nice if you could make sure you have the stuff to sell. It is not like this was the first time Åcon was in Adlon.

As for the content, our Guest of Honor Catherynne M. Valente was funny, smart, engaged, enthusiastic and our kind of people. So that was kind of nice. Also, she is an excellent writer. For me, the absolutely best thing about her work is that (maybe because of her backround as a poet?) that she engages in trying to transmit how things feel, what it is like to touch. As one of those people who do not see stories in their minds eye, that approach is extremely satisfying.

Programming, well, um. OK, the thing is I don't much care for panel programs. I like to listen to a well argued paper or clear lecture, or take part in group discussions. But panels, not really my thing. Thus my normal Åcon consists of catching few programming Items, doing my own stuff and spending the rest of the time in the bar or at the patio with friends. This time, the programming was on time, there were no real breaks and obviously the programming was interesting enough that people spent most of their time watching it. Silly things. Also the stupid awning was down all the time so it was cold on the patio, and thus the hanging out part of the con was a bit truncated.

I saw Never Mind the Bus, Aldrin, absolutely mad props to Ben for saving the day, well done. Cat's reading was also very good, both the story and her reading of it Nene, as I knew from Eurocon, is an excellent interviewer and she and Cat seemed to find each other well in the author interview. Loponen's Sapir Whorf paper was good stuff, mapping as it did, the ways SF-writers use Sapir Whorf on top of how the position of the hypothesis has changed in linguistics. Mekku does pretty complicated literary philosopy, that relies on very specific vocabulary, and heavily engages with work of others in the field. And twenty minutes is not enough time to open that up for people not familiar with it. But at least it was exactly what was ordered :-)

What else: the panel on postmodern fantasy. Look, obviously the panelists all had slightly different views on what constitutes postmodernism, and that is fine (as it is actually one of the hallmarks of postmodern thought to constantly question the nature of everything), let postmodernism defy all efforts to pin it down, let it float and sting, flollop and vollue around us. But if the panelists do not have a working definition for modernism when they talk about postmodernism, confusion ensues. Now I was left with a feeling everybody understood modernism a bit differently and then tried to discuss postmodernism through their own understanding of modernism which lead to people talking past each other.

Actually, I would really love to read a paper on modernism in fantasy. It seems to me that early genre fantasy (Tolkien, Dunsany etc.) and modernism were born both as hugely different reactions to realism and naturalism. Modernism reacting to and developing from naturalism, going from outside world to inside of human mind, and developing stylistical tecqhniques to break down and reshape narrative, and Fantasy marrying the novel form to old medieval romance. So if that is the case (and even if it isn't) where is modernistic fantasy? Where are Proust, Joyce, Woolf or Faulkner of fantasy? 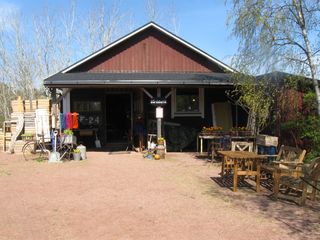 In the mornings we again took dogs and Jeeves and went around the island. Eckerö post and customs office does look incredible all on its lonesome, and both Martti and Mogens got lovely long walks on the rocky beaches. I did take part on organised excursion to Järsö island at the southern tip of the main islands where there is a lovely café and handcraft store Stickstugan. It sells both yarn and stuff you can make from it. The yarn is lovely, hand-coloured and spinned from the wool of Åland sheep. It is a bit tricky to knit as hand spinned yarns often are, but end result is gorgeous. Next time I need a proper budget.

I did not bring my knitting to Åcon, mainly because what I was knitting was a multicoloured mitten-kit (the same one that gave Yarn-harlot such trouble deciphering the Finnish instructions) and I figured counting colours and listening to panels do not really go together. (Un)fortunately, Mariehamn must have the greatest yarn-store to residents ratio in Finland, because there seemed to be yarn and craft stores everywhere one looked.

So I succumbed. I found Drops Alpaca on sale so I, you know, just had to give it a good home. I am thinking Clapotis.  I also bought few balls of Noro Silk Garden (Silk-merino-wool blend) and knitted a hat. Considering the fact that I made up the pattern and technique on the spot, I think it turned out pretty fine. Unfortunately it looked much better on my sister than on me, so I gave it to her. It even goes with her pashmina. She herself found few balls of Austermann’s Step sock yarn with embedded Aloe Vera and Jojoba oils and started knitting socks. By Saturday, both Ylva S and Ninni were also KIPping, so yay for fandom knitting! Nex Åcon, I need a budged both for beer and yarn…

And the mittens (yarn courtesy of Annash, thank you!) are almost finished too: first time I am actually almost satisfied with my colourwork technique. Rougher wool yarns are defenitely the way to go for beginners. 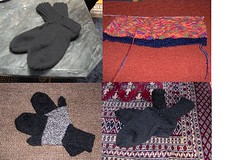 So, I did pretty good at my knitting projects during the olympics, even though I had to undo my knitting few times because I made mistakes in all the excitement.

I managed two pairs of socks, mittens and about 15 cm of a sweater I am knitting for my dad. All in all, feeling rather pleased :-)

Now If I only had time to learn how to use the photo editing instead of just randomly clicking around... 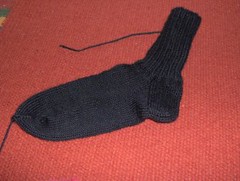 And as far as skating goes, I am just saying that the new system makes it a whole new ball game, the priorities are totally different. In men's competition it seemed like skaters with gorgeous basic skating and good choreography get benefits even though they fall, while in pairs sloppy basics and bad unison was rewarded with silver. Maybe it is a question of degrees.

Also, can I just say that I so would want not to love Sandhu's skating. Life would be so much easier... 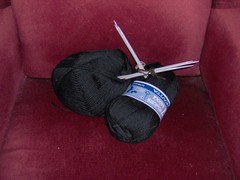 In honour of the Winter Olympics I want to share my unofficial knitting olympics project. My project is not that challenging so I have not entered myself officially to the list, but I thought the time table would help me to actually finish what I start. Also, the idea of starting a project at the exactly same time as all sorts of people over the world is kind of cool. So here it is: I am knitting plain ordinary woollen socks. These are for a friend who would not be caught dead in any other colour than black, so no playing around with colours either. These will be manly socks...

More Finnish olympic knitters at Tekele and Tuunaus, which gives me just too many ideas.

First I don't post for months, then I can't stop posting. My excuse is that this is really my first properly bloggy post in the sense it is about links.

First, a link of Teresa Nielsen Hayden's post about geek knitting. A Pi Shawl, DNA double-helix scarf... New mantra: finish the sweater before beginning anything new. And Anna is glad to know she is not the only yarn junkie in the world ;-) Teresa's post also has a link to a picture of Jukka's birthday-present. He blogged about it in Finnish, but just to reiterate, 44 people in Finnish SF fandom knitted, crocheted and felted (is that a word?) squares for a huge beadspred which says Live Long and Prosper on it. We are all quite embarassingly proud of the end result; it is just the most amazing and wonderful thing and I am still sneaking to bedroom just to look at it sometimes. Some of the squares are truly wonderful works of art and imagination - my favourite is propably Leena's alien who apparently quotes Dave Langford in Tolkien's runes - and others are just as wonderful just because someone who has not picked up knitting needles for ages did so in order to contribute.

And not only is the end-result maybe the coolest thing ever - and probably the thing I'd save from fire aside my USB stick - making of it was also fun. We wove a web of deceit and lies in order to have the meetings to crochet the quilt together. We invented sessions where one of us was supposedly teaching to the rest of us the secrets of thai-kitchen, contrived to arrive in small groups to regular fandom meatings so as not to appear suspicious, some people snuck to side rooms in bars to be re-taught how to purl and my real project to knit blankets needy children in Russian Carelia came in real handy as a cover story (pun unfortunately intended, you'll be glad to know it works also in Finnish and was already used by Jukka). And he never suspected a thing! Even though there was one close shave which was due to strong pain medication ;-) So again thanks for all of the participants, and especially to Jossu who came up with the idea. All of you guys have visitation rights to the quilt, just give us a bell and come to admire how incredibly talented we all are :-)

My other link is to Time Team drinking game. Yes, yes I know every show and its sister has a drinking game nowdays, but it is the Time Team!. We are just watching old episodes and I was feeling nostalgic: Here we are on Salisbury plains, only three days time to locate ancient Roman villa. Carenza's trench is yelding only iron age pottery, John and geophys unit are not finding much, Stuart has gone walkabout and mutters about something about banjos, and Phil just wants to dig some more or maybe make a stone age tool. Is Discovery channel still running the series in Finland? I might be tempted to get cable just to get to see Time Team again. Apparently Channel 4 has not seen fit to release the series on Video or DVD grrrr...